Placeholder aeroplane, which I downloaded from some modding site that I can't remember, has been replaced by my own aircraft model. 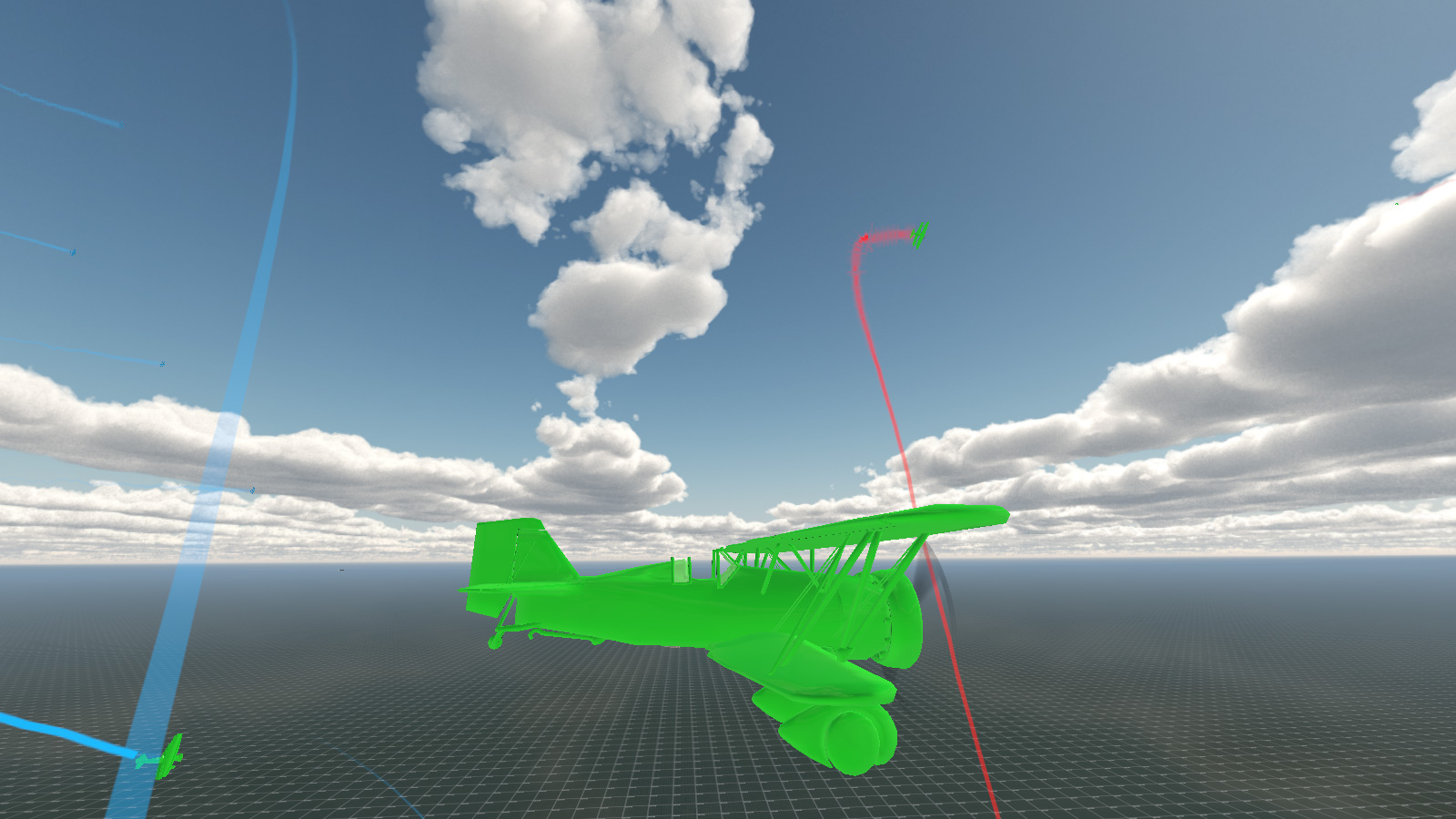 It's an F11C Goshawk biplane, which is now itself a placeholder for all other aircraft which I haven't yet modeled.

I also coded a damageable area system to give the model a visual personification (don't really think that was the word I wanted but hey ...) of the GUI damage system. 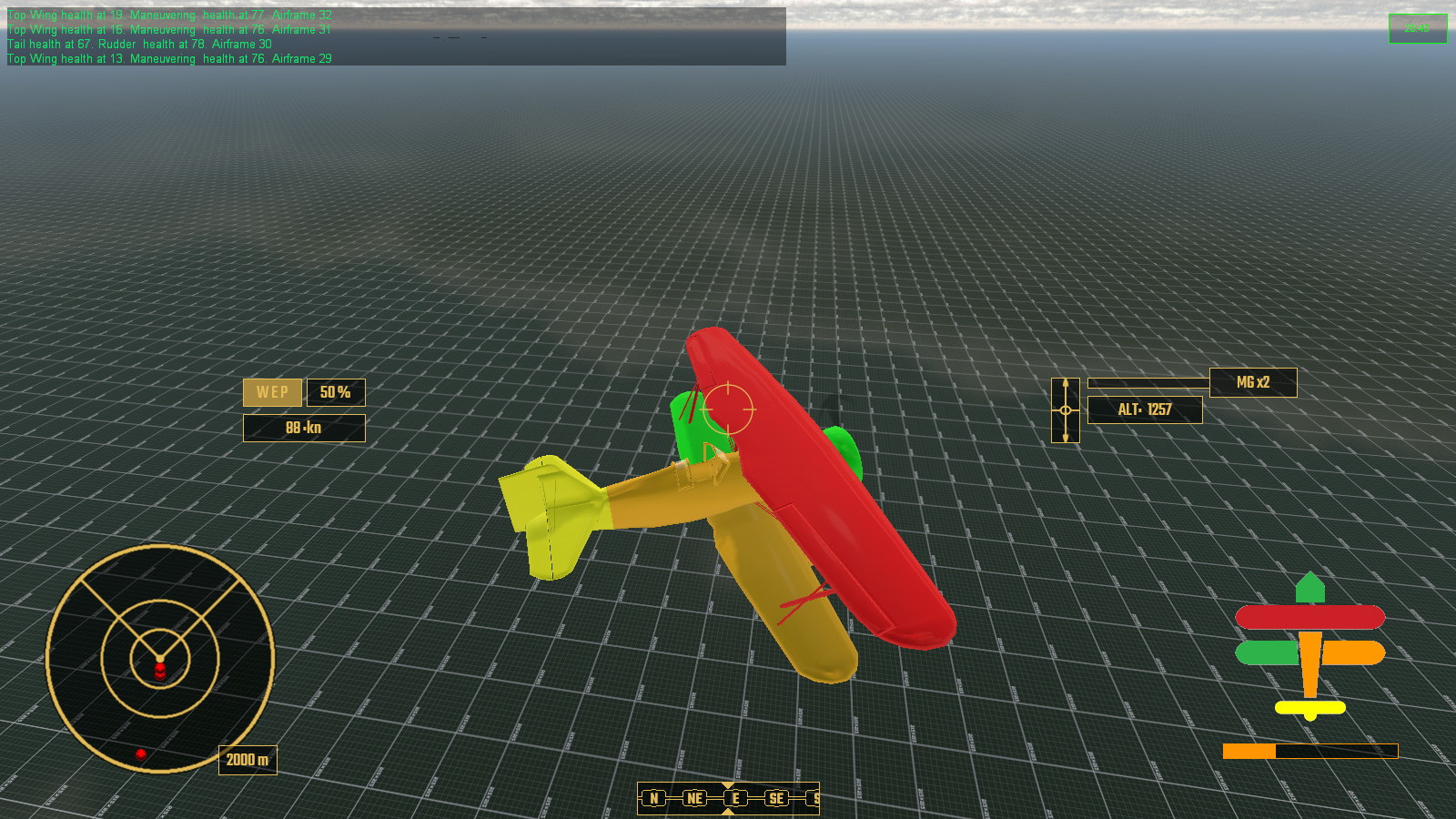 Initially this was just meshes that used the same colour system as the GUI/HUD damage indicator for area based damage so that I could see that it was working. The idea is that the aircraft model is made of multiple meshes, engine, body, tail, wings 1, 2, 3 etc and these meshes are displayed hidden depending on how much damage each individual section has taken. There are 5 levels of damage, the first being undamaged and the last being destroyed. Eventually when an area is completely destroyed it will spawn a debris or rigidShape of the part of the plane which has been shot off. Eg: the top wing will appear to rip off and the aircraft will plummet to the ground. 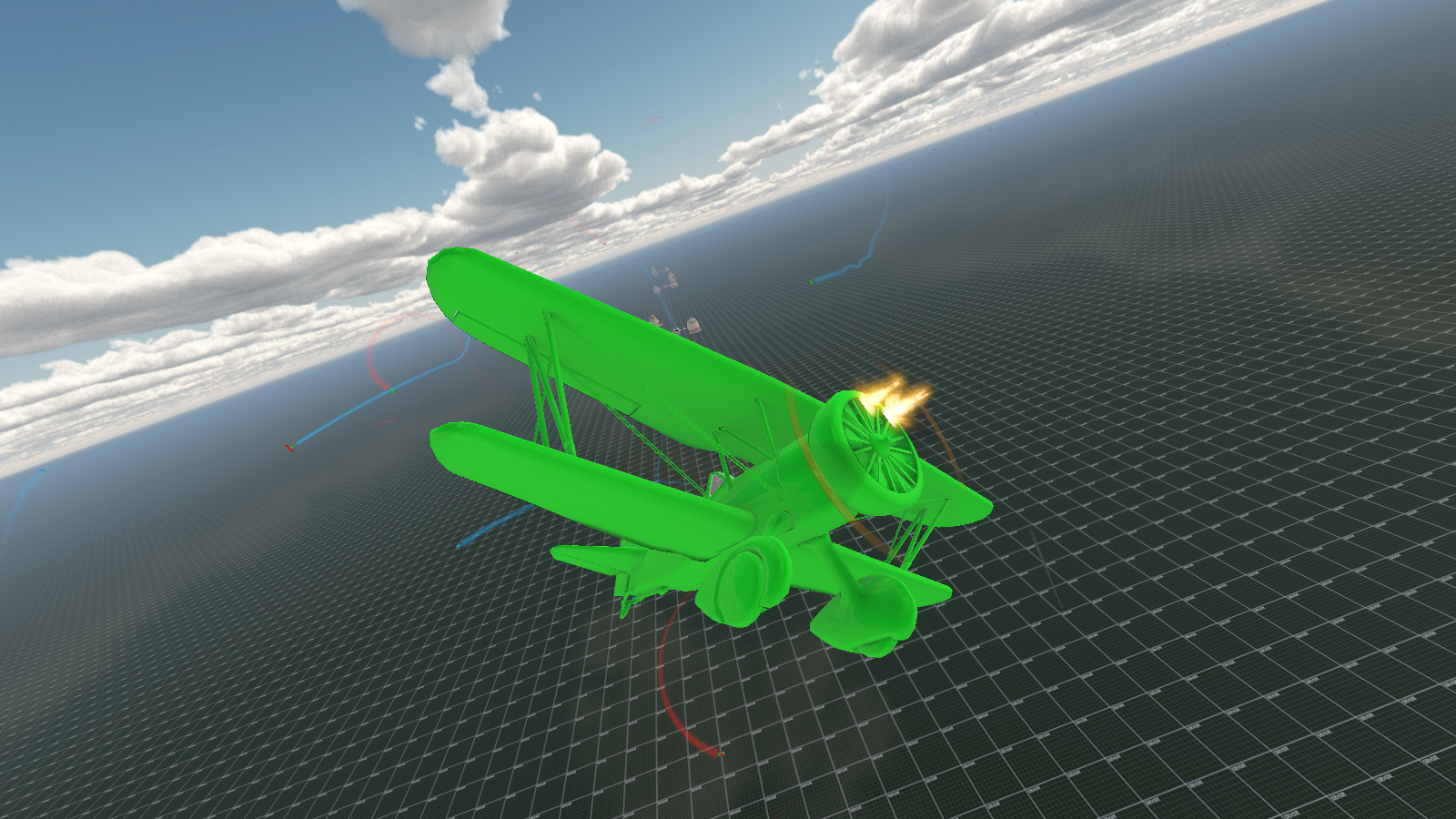 I also use this show/hide mesh system for the muzzle flashes of weapons. Previously I had simply hidden the meshes inside the model at a hugely shrunk scale, and then animated them into full size.

Next up was to test the PBR and make up some textures. I knocked up a very quick normal map and some metal and roughness maps. Initially they were rather dark, eventually I discovered this was due to too little roughness so that the metal map was rather overwhelming things. 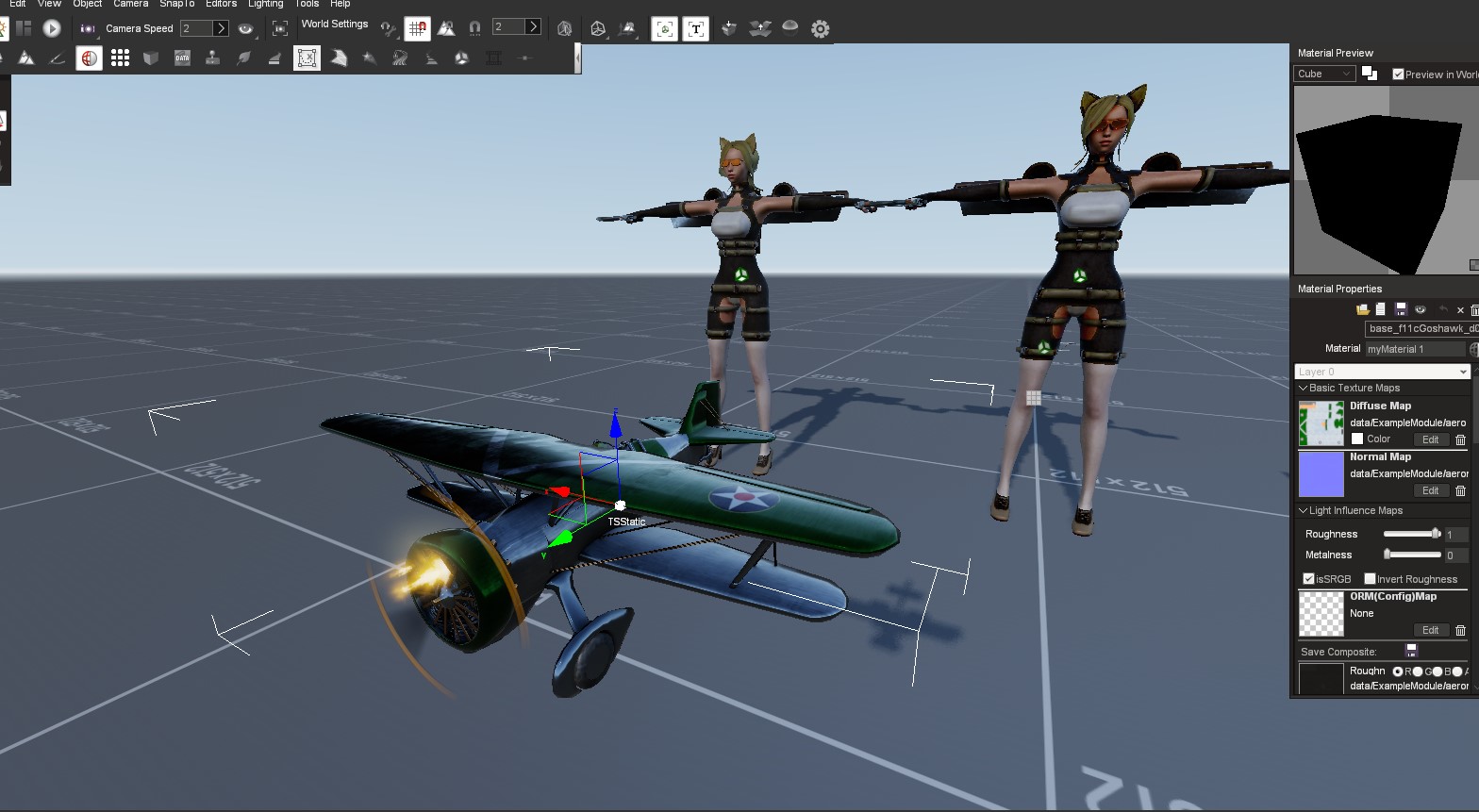 Ignore the catgirls at the back, just comparing PBR ...

After a bit of faffing I got PBR materials working, and thought that the whole looked pretty good actually.

Not bad if I say so myself

After this I proceeded to test the damage system with bullet holes. Here I noticed a fair bit of stretching which could only be remedied by completely redoing the UV mapping. 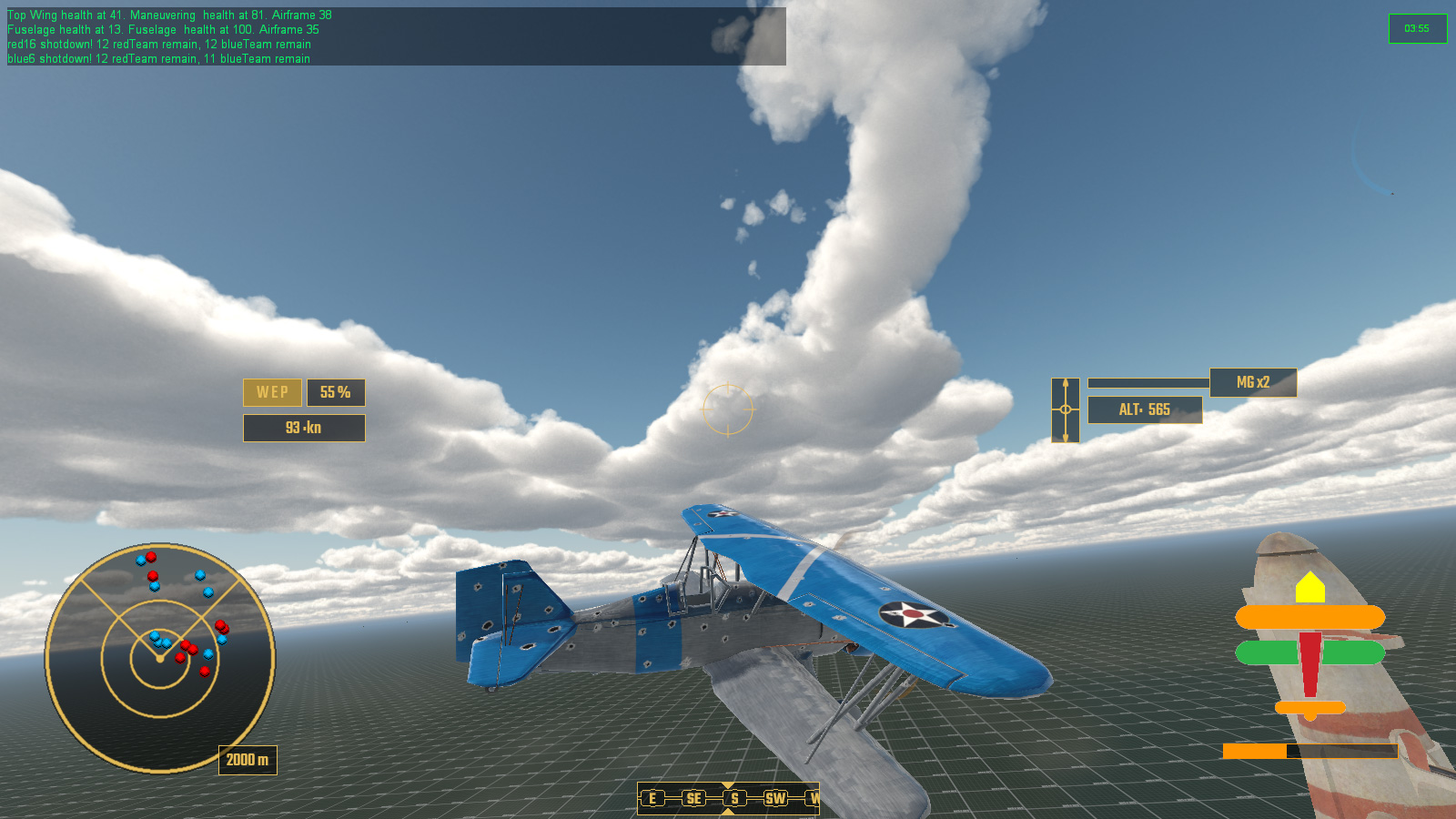 And here is a test of an AI air battle using the PBR textures. In the end I get my top wing shot off, which disappears as there is currently no debris object for destroyed areas.

So, that was the month that was.

Next up are redoing all the texture maps, albedo - which I never seem to be able to spell correctly, never had this problem when it was called diffuse - normal, metal, roughness , AO and of cause all the accompanying damage meshes and maps. After that, on to more model aircraft.

Posted by Steve_Yorkshire at 20:48 No comments: