Achievements Have been achieved. Function creep has creepeninged (!?!?!?) ... Really dumb bugs which I had not noticed before have been fixed. Post-it notes have been posted - to the bin. Embarrassing anus related typos have become history!


Maybe that should be anals of history have been rectumfied ...

There had been a sudden outbreak of the dreaded Function Creep lurgy and some alterations and additions found their way in. Some new animations, a lot of messing around with audio - the majority of which I then discarded after compeleting it because it sounded awful - and the introduction of Achievements ... which ... as expected ... introduced a shed load of new bugs which required hunting down and giving the thrashing of their lives.

I'll have to admit, I'm not a real fan of Achievements, nor of gamepads --- but I understand some people are, and the functionality for both are now in.

I did have fun thinking up a few of the names.

Both of the campaigns - Pangea, the Main Campaign where the dirigibles of the player's chose regime compete to conquer the Strategic map against the 5 Ai factions, and the Pirate Citadel, bonus Campaign where the player fights their way through enemy territory to storm the base of the Dastardly Pirates of Pangea - now have their own little intro screens, just to add a little description and background story flavour.

Also each of the regimes which the player can take control of or fight against now have their own visual description which displays the standard trooper alongside light and heavy armoured versions (stealth armour version isn't shown as it's the same as the light armoured trooper but in camouflage depending on the environment - and there are 5 of them, so that would have meant displaying 5 more models and it seemed a bit too much). Each regime also has a quote from it's leader - all with a heavy lean towards comedy, whether it's the Zulu Nation's horror at the cliche of leopard skin, Invincible President SteamLincoln's annoyance at having his opera disturbed and his hat singed, to a good old joke about the noble British crumpet.

Anyone good with Roman numerals? :P


I updated the whole single battle system ... for those who don't want to fight a 90+ battle campaign and just want a single, one off taste of tactical combat - apparently some people have lives ...

The new additions are the Task Force size - how many troops are deployed - and the level of technology available (each class has 4 levels of specialist items). There are seven - count 'em - levels of difficulty which increase or subtract troop experience, troop numbers, technology and budget for the battle.

Amongst all of this finishing stuff off - like the new dirigible models, new charge/sprint animations - guess which numpty couldn't get them to work before because of using the wrong naming convention even thought he coded the naming convention *cough*derp*cough* - there was a whole lot more bug fixing. Most of it was caused by the function creep, but some of it was exposed because of the function creep. In fact a couple of days ago I declared myself "bug free"! And within 5 minutes had found a new one ... I got twittered a joke about "day 1 patching".

Okay, we haven't ... but we did get noticed in the Saturday Screenshot and mentioned in an indie news site, which was all very, very nice. And then my inbox melted under the retweets and mentions. This was pandemonium for a fella who's lucky to get 1 email a day ...

So, my post-it note pad is empty ... well, actually it's not, it's just free of fixes and functions to do. It is currently got a few notes on it about creating a "Release Candidate" and demo version. Ah, yes, the demo version I hinted at over a year ago ... and still haven't got round to doing ... ahem ...

There's a few things which I need to sort out, both code and logistics-wise for the shipping versions, and having a look at beamNG's demo release was a great help! They included the dx9updater because ... 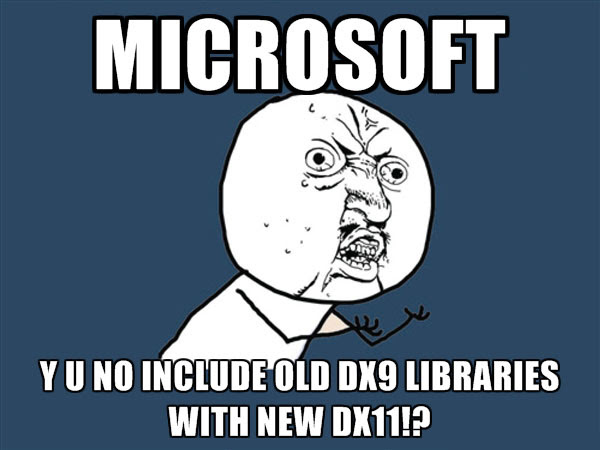 
As I've completely gone off tangent-wise, best to end, on a video of the action, menus, regimes, instructions, options, and a little bit of the Pangean Campaign in a "Sloop" class dirigible. Starting dirigble is now randomly generated for all factions - and it really does play differently between the fast, low troop capacity one and the huge, ultra slow Dreadnought version.