Stylized Art Style is ... er ... Stylized, Plus Other Stuff

But stylized is kind of a broad brush ... initially I'd attempted much more cartoonish, slapping a cartoon outline shader on it, but visually, it ended up looking really busy. Eventually I ended up drawing things out hand roughly, and then applying various filters in gimp until I got something stylized and simplified which I liked. Same process for the modeling in Blender, keeping things fairly simple, and then slapping stylized, manipulated textures on them, and doing some final tonal tweaking using the "diffuseColor" in material in T3D's material editor. 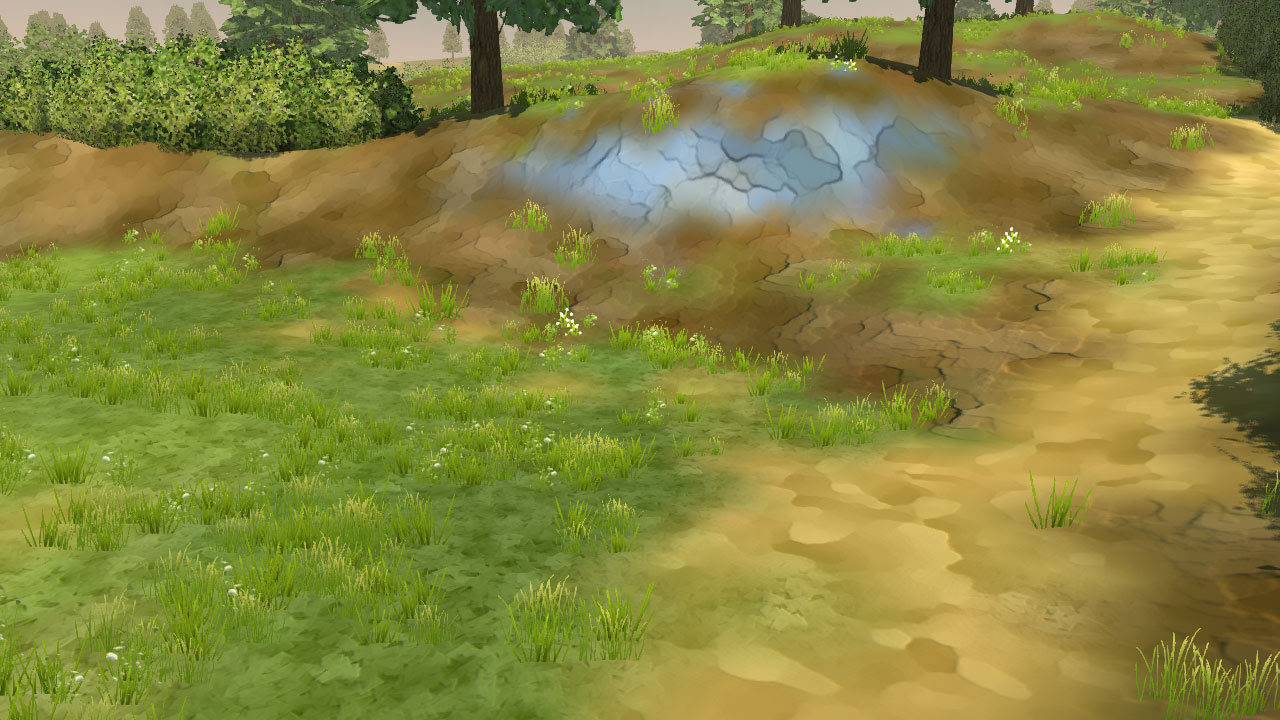 Now I also have a randomized weather system which I have whined on about before. Each weather type changes the viewable/spotable distance of targets on the battlefield. If you can't see it, you can't attack it (regardless of whether you've got a weapon with the neccessary range). So we have the same scene in the pic below in all 4 weather types.

Apart from the ground cover (grass) which was part of an art pack and may or may not be replaced eventually and the rain texture which will be replaced soon, everything else is custom, minus the player model obviously ... but that will be on the list to sort out pretty soonish, as I'm in the process of defining an alpha/beta demo. And then ... ????, because I am working on the classic plan of:

It's the middle bit which is going to take some thinking about ... and of course I'm still working on 1 in the meantime. And it is 1 which has been expanded, with two new battle modes for the squad tactics battle part of the game. Technically it's one battle mode with two sides, as it's attack and defend a HQ, symbolized as the regime's flag. In the main campaign mode (big thing, lot's of dirigibles and hexes) attacking a territory (or your territory being attacked) will result in either a clearance mission or an assault/defend mission, depending on whether or not the territory is under garrison protection.

In assault/defend gametype, the attacker attempts to storm the enemy HQ by moving into contact with the defender's flag within 30 turns (more than enough to accomplish the task or be routed trying). I've got the Ai to use booby traps if they are on the defensive (can be spotted by recce and sapper classes and defused/captureed by sappers and prematurely detonated by any other explosion) and have some available, and created tactics for their defence when protecting their HQ flag.

Amusingly, whilst doing all 6 factions flags (plus pirates), I had to check which way up a British flag goes ... apparently the wrong way is an international distress symbol - but you'd need keen eyes to spot that ...

I'd also decided to tidy up the last few loose ends of my Ai scripts, mainly to do with choosing what weapon is best under certain circumstances and how best to rearm from deceased troopers, ... and promptly found some of them to be a right old mess when reading back through them. So the old flow-chart was dusted off again for a major refit of Ai decision making. Still pending.

I've also changed the pathfinding solution that I was using and have now integrated recast - which I had previously used in a few resources enabling Ai in deathmatch in Torque3D's stock Chinatown showoff map. Read the instructions carefully for integrating recast if you've got Torque and fancy ago.

No video of it all in action yet.

So, still to do ... things ... many things ... create initial custom player types with all the animations, sort out the artwork for the GUIs, bang up a playable demo, wonder about aplha/beta funding and whether to do it ... or indeed how to do it.