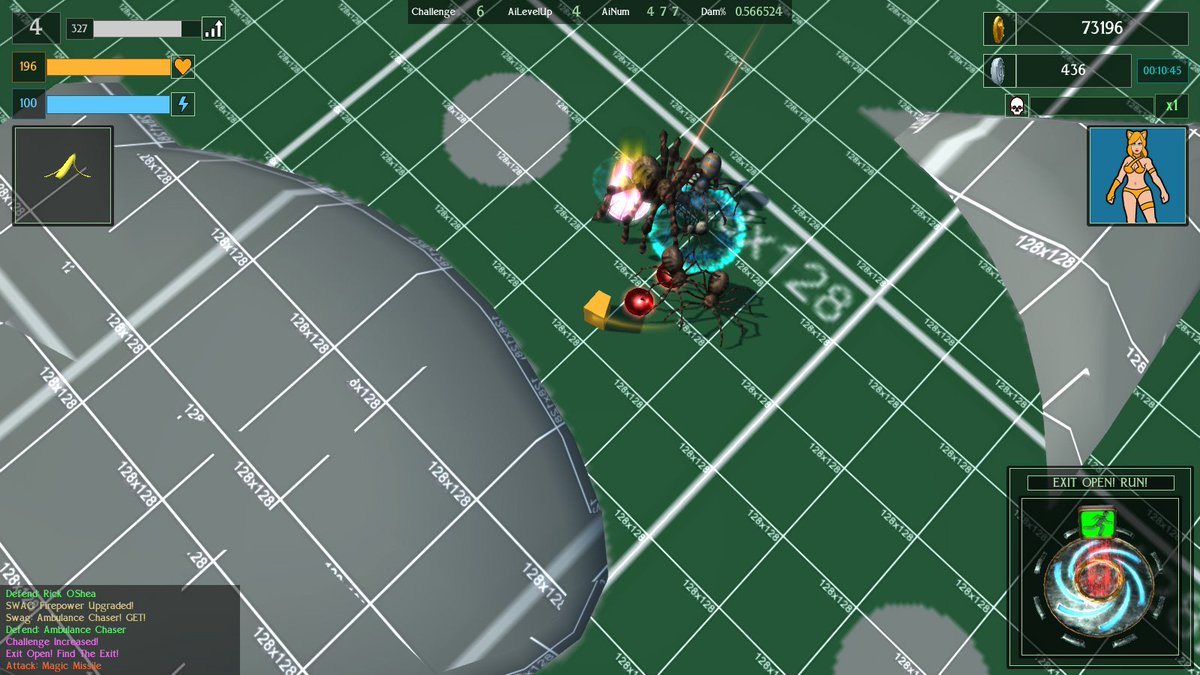 Placeholder Cube under attack from (not very hairy) spiders ...

Variety is the spice of life ... allegedly ... anyhow, I am trying to have a varied and interesting range of enemies. As an easy introduction for the player I have started out with ye dull olde zombies before venturing into more interesting adversities such as velociraptors, strange deer headed Wendigo creatures and insectoid aliens. However they are all rather ... two legged. So I decided to get away from bipedal creatures and into more ... well, legs. Thus, spiders! Now as we all know spiders are complete bro's, and anyone who says otherwise is probably a fly or mosquito or something.

I wanted hairy spiders, but quickly found that sticking hairs all over them did not really show up very well, what with the distance of the camera, so instead ended up making the spiders more shaggy. The larger the spider, the shaggier. Making shaggy spiders ended up taking way longer than expected, just like everything gamedev related ... :/ 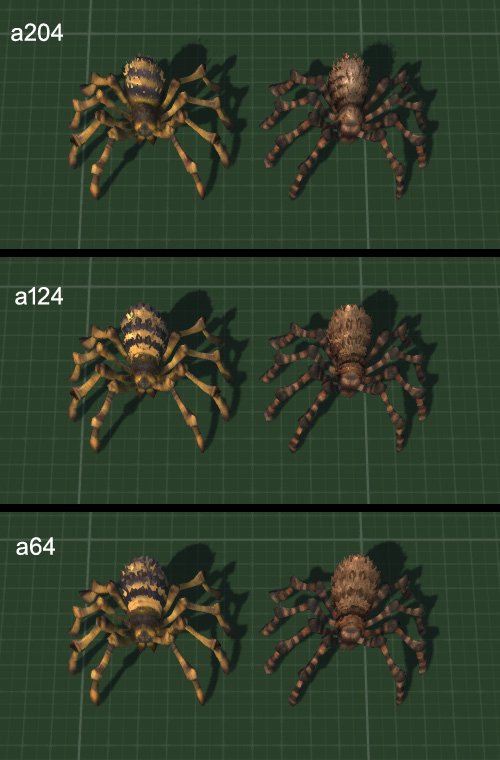 Testing various levels of spider shagginess, before I added hairs to the legs

Having a spider level, I wanted a variation in spiders themselves, and chose 3 types with obvious visual differences to help the player understand what each type does. These are, rather unsurprisingly, small, medium and large.

Small spiders are thin, smooth and spindly, without addition hairs. Small and fast, they charge at the player with a toxic bite.
Medium spiders have hairy bodies. In addition to the standard bite attack, which is less toxic than the small, charging spiders, they have a spitting attack for use at range.
Large spiders are the hairiest and serve as damage absorbing tanks. They are also the heaviest, so trying to push them aside is difficult, especially for player characters with long range weapons who are the physically weakest - eg: default gun player character. Whilst I have coded a shotgun player character I have yet to design the data for melee based ones. 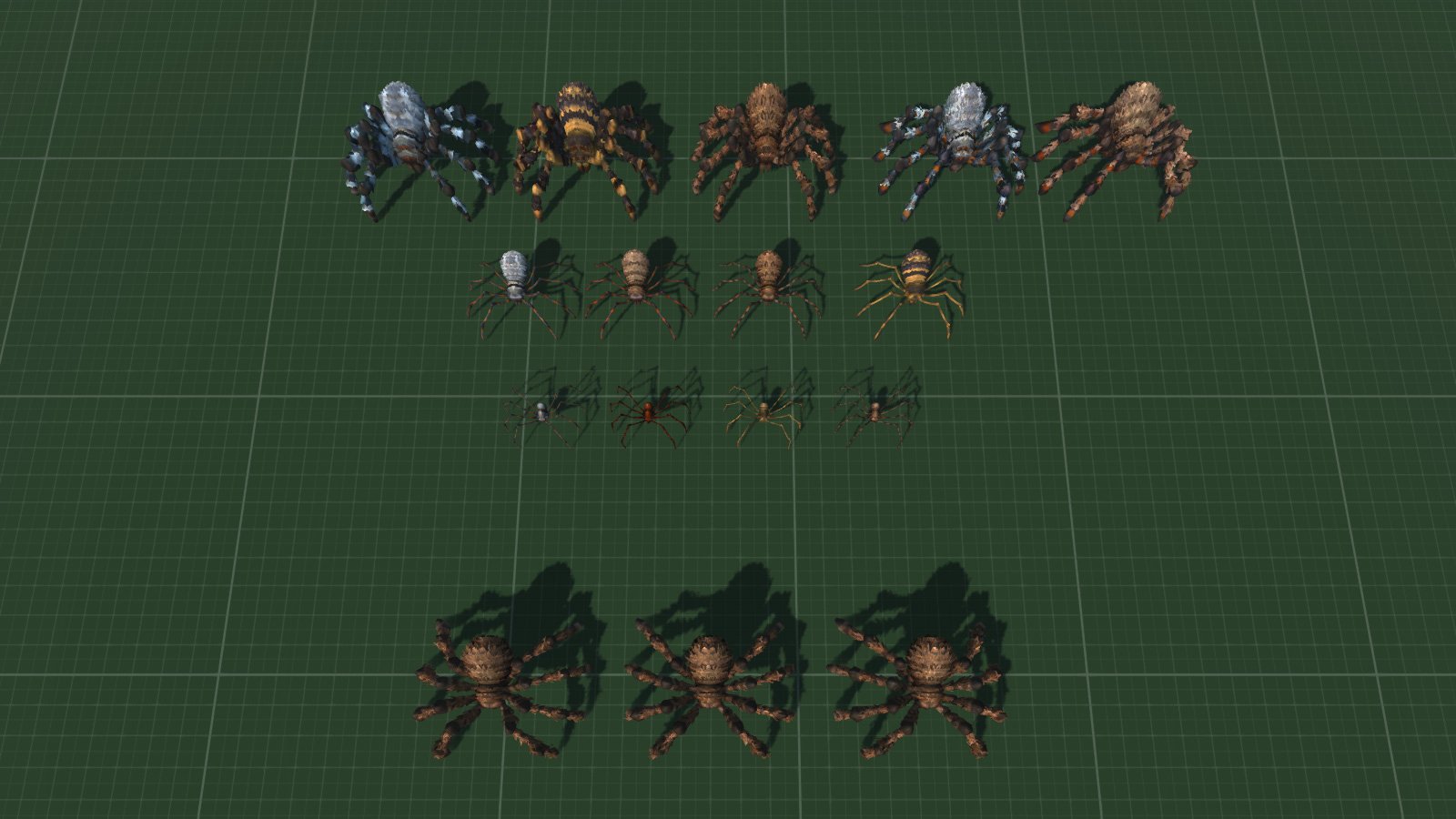 A range of spiders (and some test ones at the bottom)

Here is a good 13 minutes of testing the spider level in combat. I accidentally used the wrong model for the smallest spiders, and later also changed how the hairs cast shadow as they made the largest spiders look too dark from certain angles.

I also spent sometime thinking about general combat. First I created a "miss" effect for melee attacks which do not hit the player. For standard melee attacks this is a small distortion flash and some sparks, whilst for larger monsters there is an accompanying puff of dust. Attacks which do hit the player trigger an on-screen damage effect so there is no reason for additional effects.

I enhanced the blood decal effects too. Previously these had been a single, randomized decal. Now there is a splatter effect of blood going outwards. Standard deaths have a single additional splatter, whilst decapitations and full body explosions have considerably more.


New splattering effects before I honed and increased their randomization

All this and various additional and general gameplay tweaking - and some sun bathing because there was a heatwave - took up the whole of August.

So, what's up next. Good question. I've been rethinking my list of levels and extending it. Deer monsters level needs an additional enemy which are likely to be fast moving spritegirls with a ranged special attack. Insectoid/Mantis aliens need a melee based tank/brute. Interdimensional Shadow Knights have been modeled but are still in need of animations. There are a couple of planned levels with no modeled enemies, and all the level bosses and player characters are currently placeholder cubes. Several special attacks still require fancy models and of course all the actual levels are just the single test environment. Originally I was planning on creating whole levels out of meshes and lightmapping it all to save CPU/GPU load but now I am not so sure and might use the more "traditional" methods of creating the environments.