Back To The Future - To Integrate It With The Present

No not the 1985 comedy where Christopher Lloyd mispronounces "gigawatts" as "jigawatts" and contained a cameo by Heuy Lewis as well as his song "The Power of Love" in the soundtrack. So no, not that one.

The "Main Campaign" which I first started way back through the distant mists of time ... or summer 2011 as it was called back then. The one with the dirigibles which move around, capturing territory and depositing troops for battle.

Currently we are - and that's the Royal we of myself in third person remember - retrofitting that campaign system to work with how the game later developed, so that it all fits in seamlessly with the functions for the "not so short campaign" and the tactical battle mode.

In fact the "not so short campaign" has been renamed "The Citadel Campaign" - because you're objective is to battle through increasinly well equipped enemy territories to besiege the "Pirates of Pangea's" mighty citadel. The "Main Campaign" is now the 'Pangean Campaign' and takes the shape of the player and 5 other factions controlled by individual Ai's fighting to conquer the pirate infested and procedurally generated supercontinent of Pangea.

The majority of the changes for the "Pangean Campaign" - save for the GUI being updated - are in the background, with the Ai now replicating the player's progression accurately with troops increasing in experience dependant on current levels, casualties and expenditure. In fact there's a frightening amount of mathematics for Ai strategic decision making and expansion/contraction of veterans, finances, dirigibles, territories and equipment which I worked out over multiple Post-It notes ... having a minor disaster when I ran out of Post-Its and had to use real paper.

There's also been various balancing to functions and a whole host of bugfixes. Looking back at some of the early custom code and script base did give the occaisional raised eyebrow at how different the logic system had changed since the introduction of the "Citadel Campaign" and the Tactical Battle Mode with their more intertwined functionality. Territory once owned by the player but which is lost to opponents slowly returns to it's "unknown/fog of war" state as the distance between it and player territory expands.

I also created a set of difficulty modes for the "Pangean Campaign", including a hard mode where the whole of the continent is infested with the pirate faction.

Whilst I had been hoping to finalize all of this and be "feature complete" by the last day of 2012, the Xmas season has rather put a dint in my work schedule, what with having to go outside and occaisionally see other human beings and the such. Also I got a considerable amount of fine scotch at prezzies.

So all that remains of the "Pangean Campaign" functionality is the creation of a "buy/sell/mod Dirigible" GUI for the player - the Ai already have functions to decide on how best to approach all of this for themselves - and make certain that the results of a Tactical Battle between the Player and an Ai Faction are carried over to the Strategy part of the Campaign correctly.

The Tactical Battle Mode is nearly complete save for one small tweak I want to make so that the Ai can properly utilize artillery/airstrikes in the same way that the player can. I originally intended to have mechanized assault gun style tanks available, but after initial testing they were clearly too unbalanced and I cut that particular feature whilst making personal armour more effective so that the array of high explosive weapons available still had something useful to counter.

Whilst I am expecting to be "feature complete" some time next month, this is by no means "art" complete. The vast majority of the models and textures on view are placeholders. I am still hopeful for a fully finalized demo version of the "Single Tactical Battle Mode" available late February or March - possibly with an early adopter version of the game which is fully featured with campaigns, and missing a few finalized art assets (eg: probably a low number of tactical battle maps) that can be updated on completion.

Still hopeful for a final full release on or before the 1st of June - which is exactly the day in 2011 which I started, and would make the whole development cycle 2 full years exactly. If it hadn't of been for 3 rewrites to major parts (2 rewrites and an improvement actually) and a whole load of messing around with mesh deformations it would have been considerably sooner.

But anyhow, live, learn and improve ... hopefully ...
Posted by Steve_Yorkshire at 04:25 No comments:

Make A Button, How Hard Can It Be? Fuuuuu-

Question: How hard can it be to make a button?

Answer: Fuuuu- Also it is as boring as hell making the artwork for half a gazillion GUI objects


I have somewhere around 44 items in game.
Each one needs a GUI explaining what it does.
Each one had a typo which I only spotted after 28 images had been done.
Each of the 28 was fixed.
Each item needs 3 bitmap images for a button for normal, highlight and depressed/toggled on.
Each one was damn boring to do.

Game design is boring. Constantly reiterating and tweaking is boring. Rewriting my whole game 3 times was boring - but at least it had the benefits of being intellectually stimulating. Making sure that half a gazillion GUI elements have a similar pattern on their border is not intellectually stimulating. It's dull. It's one of the many dull and repetitive parts of game design which is devoid of challenge, it's just grind.

Maybe this is what playing an MMO is like?

Now I see why game developers employ so many people, so that they have someone who enjoys dull, repetitive, tedious tasks which require no challenge other than enjoying tedium. I imagine they look like Andy Serkis, after he'd been digitized as Gollum ...

Then there was the artwork for all of the other GUI elements. Suddenly having different GUI elements sharing the same artwork became awfully important. For starters it helps to reduce total overhead on loaded textures. Secondly it means making less GUI bitmaps.

After a bit of jiggery-pokery both my completely different Campaign modes shared most of their GUI elements. Hurray!

Then there was still the slight issue of the player having no idea how to play the game, which meant documentation. I decided on a two fold strategy, having the whole docs in the main menu (still pending) and having individual instructions for each part of the game. For instance choosing and equipping your squad for deployment has it's own GUI docs - which share a common border. They are accessable from the "choosing and equipping your squad for deployment" part of the game.

Docs also presented a new challenge - making them understandable in the least amount of words. So the docs have had a few rewrites to try and distill the necessary information without the reader having to spend hours scrolling through them.

All the docs are kept in a folder name "RTFM".

With so many items in game I'd decided to keep the item button images as a stylized silhouette for weapons with the calibre displayed so that the player can instantly see what type of ammunition they need reloading with and can toggle the "info" button and then press the weapon's button in the inventory to see all of the relevant information on it. None weapon items are displayed with a stylized logo representing it and the the item's name.

All item buttons and information screens are a stylized blue to show that they are interactive - a bit like the idea of a blueprint and it helps to mark them out from the background of the GUI. All "toggled on" buttons are also blue to show that they are interactive. The rest of the GUI's are a stylized red/yellow colour scheme, representative of brass/copper sort of colours which often pertain to steampunk. And it now does have much more of a steampunk feel with the finalized interface.

The interface is by no way completed, the pop-up message boxes still need skinning as do the flags representing the various factions (6 playable choices and 1 Ai pirates) and the background of the main menu is a placeholder.

So, how hard can it be to make a button?

I'd had an idea of faking a 3D look with a copper/brass style button, having light coming at it from the top left. It certainly looked fake 3D, I just didn't like the style. I set out to gather some influences on steampunk button design via the internet and used relevant keywords about "steampunk" and "buttons". 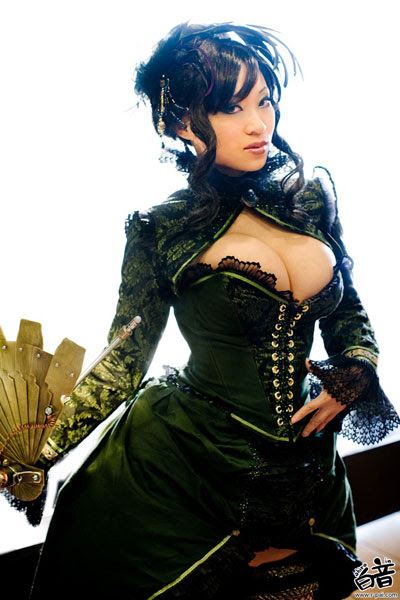 Buttons where? The internet was not being helpful ...

After a thoroughly exhaustive search of the internet's hottest steampunk cosplayers during which I lost track of time and space, I decided to just make a button that was based on a fairly average button - and throw a border on it to give it steampunk blocky bulk. And in the end I quite liked this attempt and decided to stick with it.

In other news I physically modeled (physically as in virtual 3D models which ... er ... aren't really physcial at all) a variety of weapons - though still have a whole load (though thankfully now a minority) to complete before I'm finished with this part. Needless to say I still haven't got round to having another crack at the deformations on my initial character model, so that's still to come ... again, annoyingly. But I do have a plan of things to attempt with it.

So, getting there, have a couple of additions and tweaks to make to AI scripts and the Main Campaign (the bit with the dirigibles in my ver old videos) needs a few fixes, tweaks and it's startup sequence being brought into line with the new way of doing things which everything else now share (Single Battle and the fully working Bonus Campaign).


Anyhow, here's a video featuring the new look GUIs and a bit in-game battle plus the post battle GUIs. Remember, message boxes and regime flags haven't been touched yet.


In additional news, I need to sort out button clicks prior to the server's creation. And I completely forgot to show the "how to create a squad and equip them for battle" in the video ... which is below. GUI examples and a bit of a scrap in-game.

Posted by Steve_Yorkshire at 21:38 No comments: