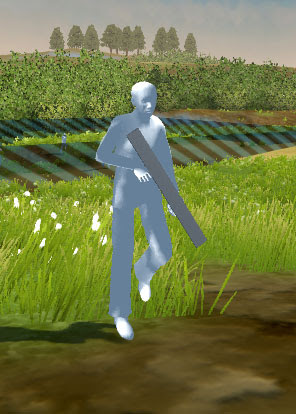 So as you can hopefully see, I've followed my clean, stylized concept of design from the characters and continued it into the weapons which are made of 3 textures, a dark mahagony style wood for furniture/frame, a gun-blue metal for barrels and general fitting and a brass metal for additional fittings such as the large gas regulators for the semi/fully automatic weapons. Light armour itself is simply denoted by a helmet on top of the standard uniform. Stealth armour is the same but in camouflage and that as well as heavy armour are not yet completed.

There's quite a lot of Guns Guns Guns Guns Guns Guns ... and bullets too. 6 Classes, each with their own 4 types of equipment - some of which are guns - and then universal equipment - some of which are again guns - and then 4 seperate types of ammunition. And then artillery. It is rather a lot of information to remember. After lots of play through, no doubt it will all settle in some vaguely congnitive part of the user's brain. However until such a time, people are going to want to be able to check on what weapon uses what bullets which do what damage over what range.

To this effect, I decided it would be a good idea to have the calibre of the weapon on the icon for that weapon, or the actual name of the equipment on that equipment icon. All to help with instant indentification of the object. Weapons only use a stylized picture so if the player has forgotten what it is, or cannot remember what it is that a particular piece of equipment actually does, it would be nice to be able to check quickly, rather than wade through a manual - which in the digital age don't tend to exist physically, so wading through a pdf in another window or some sort of volumous in-game help.

And so here's a little amalgamation of equipment information pop-ups.

From this you can now see that "Stealth Armour" works by reducing the enemy's spotting range by one third, has a penalty for hot climates, has another penalty for none "Recce" classes and loses it's stealth function if you open fire and give your position away. All in nice, neat, easily accessible pop-up from the inventory.

Also, as I've noticed on some talk on irc about jitter on the loading of dynamic textures, I thought that I'd just mention that deep down in the bowels of a map's "origin" (0, 0, 0), I have a few things hidden, a couple of objects and a large plane with multiple textures on it. Also note that my blood splatters and bullet holes are contained as segments within their own type of single texture. So rather than having 16 small blood splatter materials, I have one single material split into 16 sections. There is still the occassional jitter when a new dynamic object is created for the first time (eg: an explosion, a bullet, a particle) but it's reduced when the material is preloaded into the map.

Also ... NEW BLOG FORMAT! As I realized that the other one was a little "1024 x 768" optimized, and monitors have progressed somewhat - hell, I use a 40" 'ello Tosh got a Toshiba 1080p TV for my desktop. With pixel rates soaring it gets kinda iffy to see clearly on anything smaller ...
Posted by Steve_Yorkshire at 21:05 No comments: