With construction of a vaguely working alpha demo in progress, I was hammering away at the splash screen license obligations ... a glance to irc and wtf everybody's just got sacked that worked on the engine tech I use ...

So, it's been user interface work recently, and additional gametype ... err ... types.

I'd been quite chuffed with my implementation of a randomized gametype, and had expanded on the initial idea. There were 5 open areas of a 2km level, the player was randomly equipped and initially randomly spawned at one area and each area had to be cleared in any order the player fancied. Random numbers of Enemy Ai were randomly spread through each area, and randomly armed with either short or long range weapons depending on what sort of view they had. Hiding inside a house = short range, view from a window or rooftop = long range.

I figured I could throw in a few more random ideas to increase gameplay, and so came up with strongpoints and counterattacks on top of clearance ... which happen ... randomly. Thus each area could be a standard clearance operation where the player had to hunt down each Enemy spread throughout the area, but now it could also be an assault against a randomly chosen building crowded with hostile Ai, or the enemy Ai would come looking for trouble when they heard allies shooting ... but only halfway from their defensive position to player spawn area to prevent spawnkills. Regardless of random tactic type, all short-range weaponed Ai always counterattacked over a very short distance to prevent themselves being picked off at range, that way long-ranged Ai would stay put to provide supporting fire whilst short-ranged would be mobile around the goal node.

And I'd managed to fit in my "anti last man standing" idea, where the allied Ai swarm over the location of the last remaining enemy, thus preventing those frustrating "can't find the last bad guy to finish the level" type issues which can occur with such things.

I gave the player 3 respawns per area, and had dead Ai drop either ammunition, grenades or a small health pack. Each area took me around 20 minutes to play through, and taking down all 5 areas of the map could take 2 hours. So I made a "fast gametype".

Fast gametype was a random strongpoint attack in a single area, with a slightly more beefed up number of random enemies to guarentee plenty of action. This made me think of a few variations for additional gametypes ... but ... y'know ... one thing at a time.

As ever, I found a gazzilion issues with everything I did, great swathes of script wrote at 5am that were never going to function properly in the cold light of day, and various other bugs that got stomped on and features that got relentlessly tweaked.

All this new stuff needed a user interface. Not just for mission selection, but also the type of instructions and info that you'd expect, such as what the controls are and what the differences between the various weapons are.

I also thought that it might be a good idea to explain what the hell the whole thing is ... plus I then had to look through all of my stuff to see what I'd used. Now, I have attempted to do as much as I can almost all of the audio is my own - but I couldn't get a good fire/burning loop, but everything else is self done. All of the models are hamfistedly made, rigged, textured, animated by myself. I used various self shot photos for base texture templates and tiled them myself ... and then got the rest of the templates from on-line. Fonts and music weren't even worth my attempting and so were straight off licensed from the start. I haven't even looked at Fmod Ex yet, having just thrown in the audio dll. And that's all this stuff takes so much time. 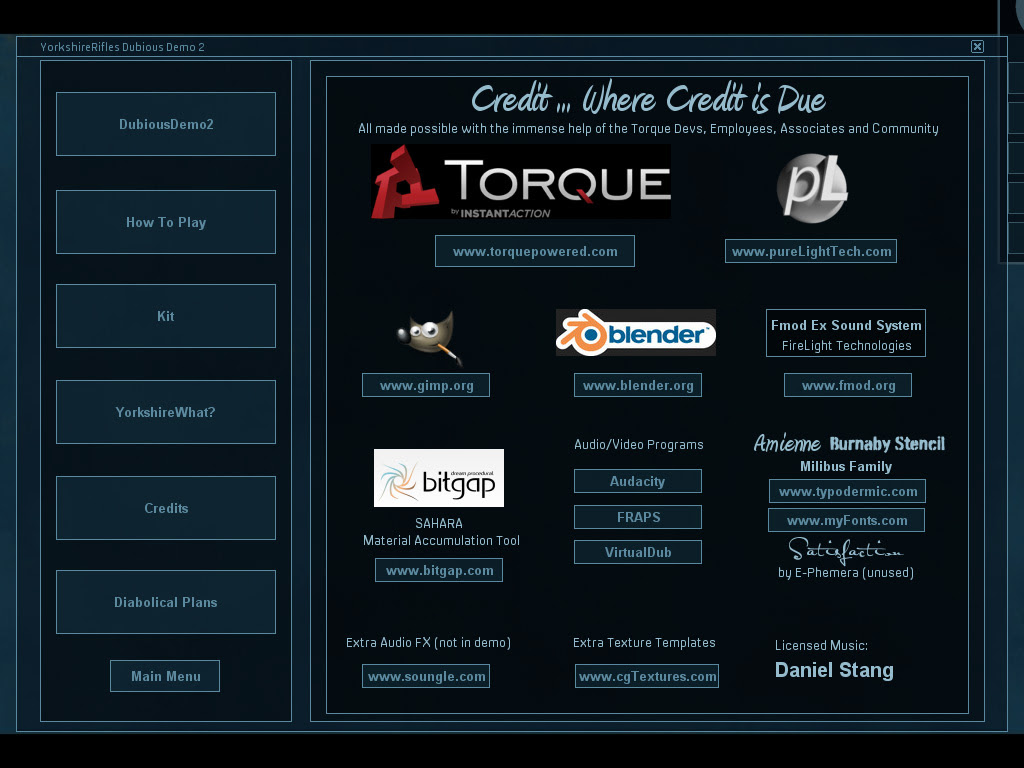 And then there were some annoying issues. My pathfinding is based on a waypoint resource, though it hasn't scaled well to such a large and open environment. I've got a level with a lot of changes in height and direction and the sheer number of waypoint style objects for the Ai to navigate around the whole thing has eaten 25 percent of my performance - which is annoying ...

But currently ... that's how my alpha demo will be going out. Afterwards I'll have to take a look at nodegrids and maybe other solutions as a replacement.

Also I need to do a bit of 2D artwork to "tart" it up a bit, and 2 of my buildings are still placeholders. And there's some functions hacking I think I might try as a performance test ...