Back to remodeling my remodeled models ... models.
And LODing, lots of LODing.
And we're not going to be rejiggering the pokery again, this is the final cut of character models.

This was what changed the last big alteration, as posted in this old blog.

But frankly there were still plenty of issues, especially with dodgy deformation around the arms, so after fluffy bunny slipper catgirl got scratch built, then tweaked for better joints, everyone else has needed a bit of a rebuild from scratch too.

Obviously the best way to do this is to have a set of standard "base" characters to act as a blueprint, one for male and one for female. With deformation going to be as good as I could get, it was time to plough on with rebuilding my base soldier model. Still sticking to the principals of keep things fairly simple, most characters are sharing the same pants and footware textures. I beefed up the body armour considerably, and so it no longer looks like a leather jerkin from Henry V. So, once more into the breach, dear friends ...

Old versus new version as seen in Blender. 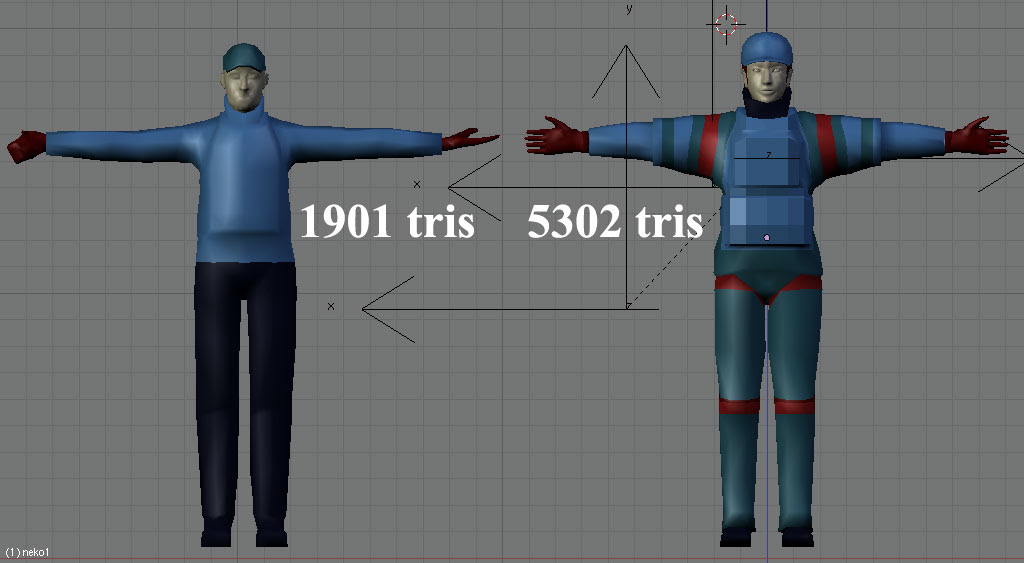 Actually, I trimmed a few polys off the head, it was much too detailed under the cap, and as the cap isn't coming off there was no point in having a full head of hair underneath it. So LOD_0 weighs in at 4958 tris.

I ended up 7 LODs in total, cutting down polys and texture numbers as they go - the last one blank to make sure that the model will disappear totally at 8 pixels. I've found that without having an empty level of detail the last LOD will always display. It hadn't previously occured to me that textures should be LODed out too, but I saw someone ... somewhere ... in the forums mention that the last LOD should only have one texture to reduce draw passes.

Now the reason why 4 and 5 are so similar is that skin reflects, and I found it a bit of a jump when the pale skin colour popped into view, so I made an extra LOD which was basically the same blocky, stick figure as 5, but carried the skin texture for the face, thus easing the popping of the contrasting tone of the two remaining textures.

Bent over Gimp and feverishly scrawling on my tablet, I'd also redrew the textures up to scratch a little more.

And what it looks like skinned in comparison to the old model. 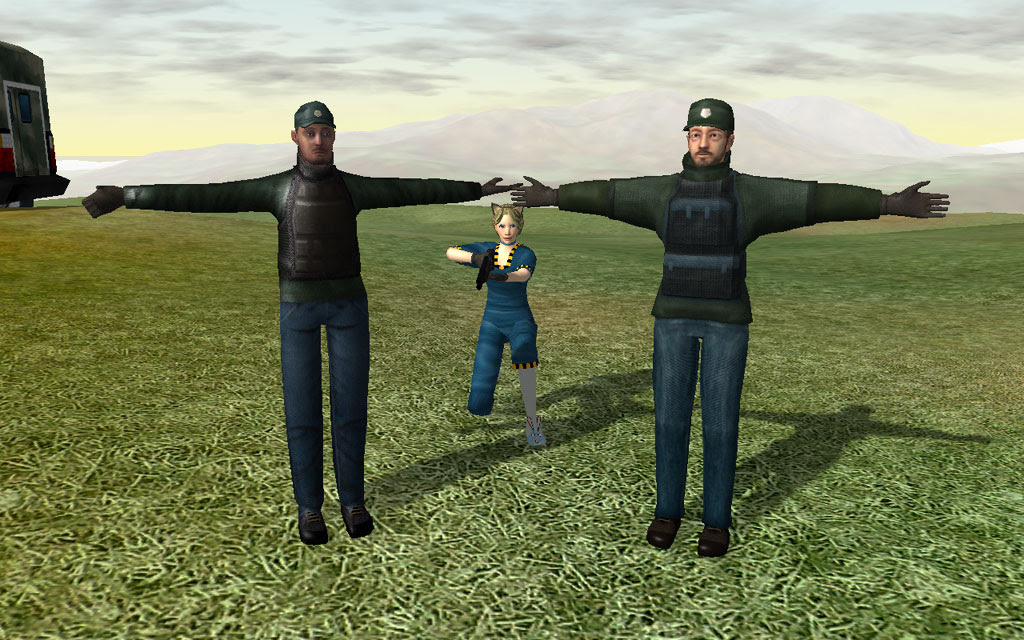 Righty-ho, now I need to knock up a security guard, and then probably work on bad guys of a scary disposition.

Merry Ruddy Crimbo
Posted by Steve_Yorkshire at 22:31 No comments: