And sometimes, it actually is.

I was attempting to redo ... reimagine ... resomethingerother ... my current game's difficulty curve. This proved harder than I was expecting, and resulted in much flagrant use of Post-It Notes(™?).

Here is the issue.

Cash dropped by defeated enemies increases by enemy lifeforce (not to be confused with Lifeforce, the 1980s UK/US collaboration which featured this hot bird with massive ... tracks of land ...

This film is severley underrated ... for scifi reasons ... also boobz ...

And back to math ... or as us colonial imperialistic types call it ... MATHS.

I had previously devised (with help of arcane magick, alchemy and winged goblins) a perfectly good manner for AI enemies to have less cash as the player progressed. Here is the CRUX of the issue (somewhat appropriate as it is Easter weekend). The player score points on ANYTHING - especially cash transactions. So limiting the available cash to buy SWAG (powerups) in later levels was good ... but also decreased points which were available to be added to the player score.

So obviously I wanted to reverse the points reduction by letting the AI enemy have a fully score ... whilst increasing the cost of buying SWAG by points x levels x f***knowswot. And f***knowswot became an issue. Much mathematics was done - insert your own doge meme here - nah have this one: 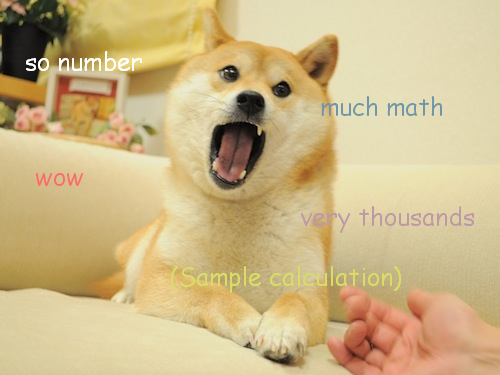 Now you'd kinda expect this to be a simple mathematical reversal ... but that didn't happen. Much toil and even more trouble and three times as much bubble occured (note the reference to prove that I am a psuedo-intellectual). Anyhow, eventually, and after using half the world's supply of Post-It Notes I managed a solution

Like this but way more vacant in the eyes ... also more crying

And so I emerged victorious, after destroying all the world's rainforests in little yellow, sticky papers.

Cost of opening SWAG parcels increased in line with AI  enemy's strength. And all was well in the kingdom of ... er ... game dev.

Tune in next month for all that stuff which I promised I would be doing months ago but have still not got round to!

That stuff I said I was going to do next
Posted by Steve_Yorkshire at 23:46 No comments: