Of Wendigos And Monstrous Morris Men

There's been a heatwave ... and I have got "The Dreaded Lurgy". It's not been a great combination. However, though only tenuously attached to this mortal coil with sickness, I have risen from my death bed to write this blog, and show the work I've been doing whilst on death's door ...

I was going to do some spiders as enemies for the player, but instead ended up grappling with some sort of Wendigo/Beast of the Wilds/Herne the Hunter sort of thingy-majig. I have bought a number of models, mostly for the animations, and have decided to retro-fit and modify them for my purposes. So I amalgamated a number of models in creating "The Deer Hunter", a sort of archetypal monster of the wilderness which I intend the player to come across in a rather desolate and windy steppe-like grassland. 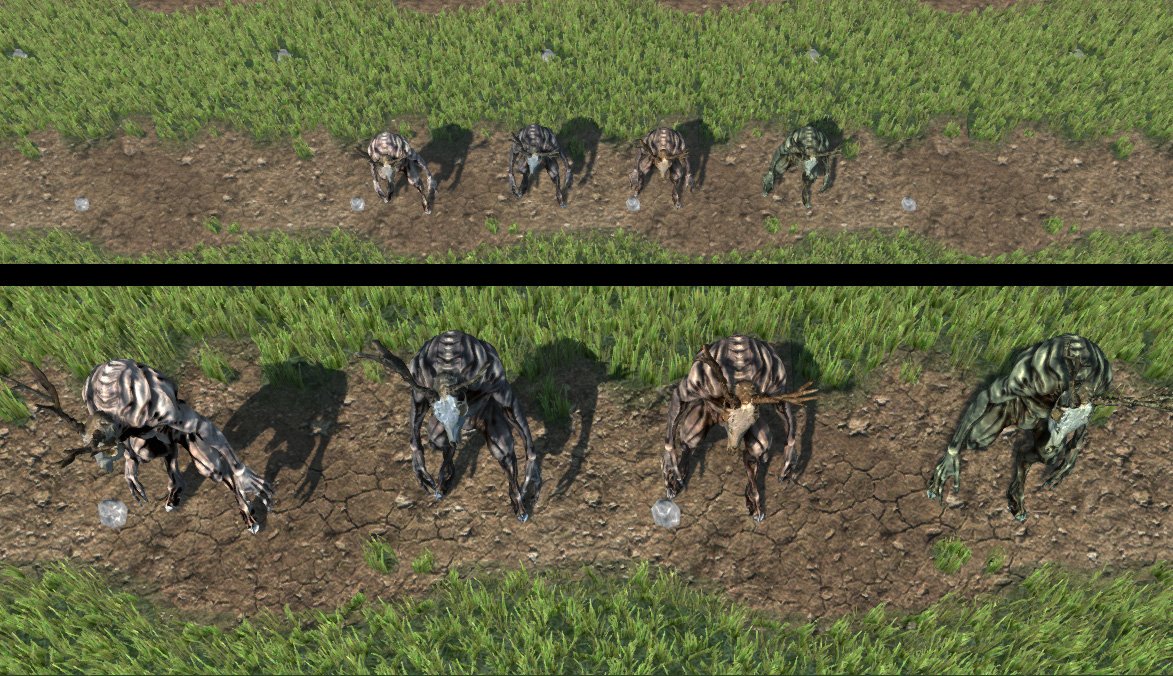 I was umming-and-ahhing a bit about how to spawn them in the level as it seems almost everything comes out of the ground. One it's convenient and two it sort of fits that creatures emerge from their own lands. To give a bit of variation, and to avoid everything clawing it's way out of the ground like a zombie, I decided that the Deer Hunter would rise up as though propelled on a lift (that's an elevator to our former colonial cousins), holding it's skull in it's hands, and then fit it's head into place. I thought it was a rather amusing effect.

Over here son, on my head!

I also thought that this might be a good time to introduce the player to invisible enemies. They come in two types based on the shader effect I used. One is a slightly wavy Predator style optical camouflage effect which produces near invisibility whilst the other has an internal shadow which makes the distortion more noticeable. I still fondly remember playing Doom against a horde of pink Demons when suddenly I realised I was getting bitten by an invisible one. Learning that some enemies are (semi)invisible is always a nice shock for the player.

Another variant on this stag monster was the "Monstrous Morris Man".  This is basically the Deer Hunter with different antlers, wearing a Morris Dancer style rag coat (a coat covered in strips of rags). That's the bit inspired by Morris Dancers and thus there is a lot less drinking ale and prancing about waving a sticks, and no guy called "The Fool" with black smeared on his face. Why has he got black smeared on his face? Because he's covered in shit and doesn't know it. Why doesn't he know he's covered in shit? Because he's "The Fool".

The rags themselves were looking a bit flat, so I created a second UV channel and unwrapped it using Blender 3D's automated lightmap unwrapping, so that none of the polygons overlapped and that they were all clustered nicely side by side. I then baked ambient occlusion to this channel. Once exported and in-game, I added the new ambient occlusion image (with alpha inverted of course!) into the Overlay channel of the material file. 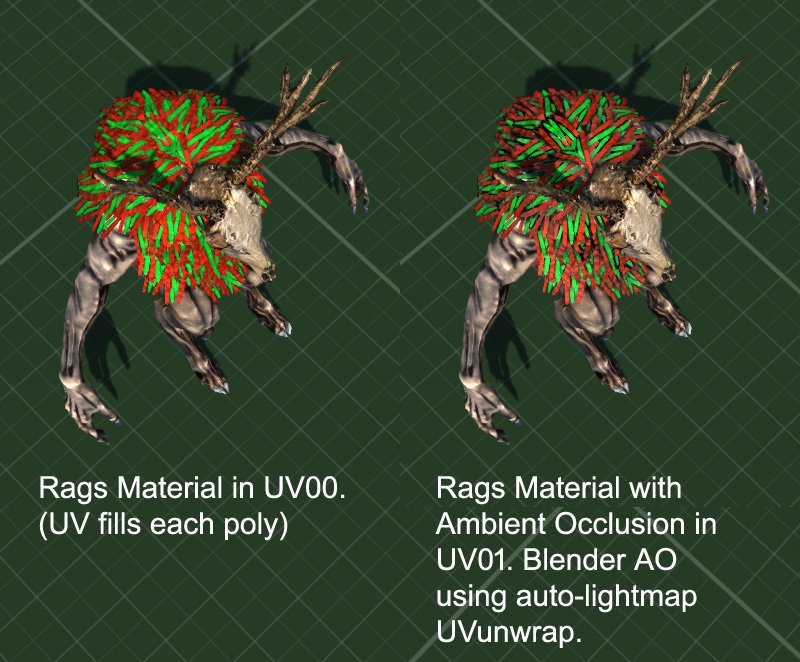 The Monstrous Morris Man comes with a long range special attack, and is able to throw some sort of energy bomb over distance. Other than that, all these creatures are melee based. Below is a video showcasing various spawning, deaths and finally special attack.


Another month, and more progress ... and a being ill in a heatwave, which is a real annoyance. So next month ... maybe get those spiders working.
Posted by Steve_Yorkshire at 22:13 No comments: